A final progress report and photo for 2019.

The Builders are now on their Christmas break, but last week the internal fit-out continued, with the Electrician and Plumber first-fixes done, the studding complete and all ready in the New Year to start the plasterboarding and ceiling. At present, a builder’s completion date is looking like the end of January, with further work such as painting to be carried out by Shed members. 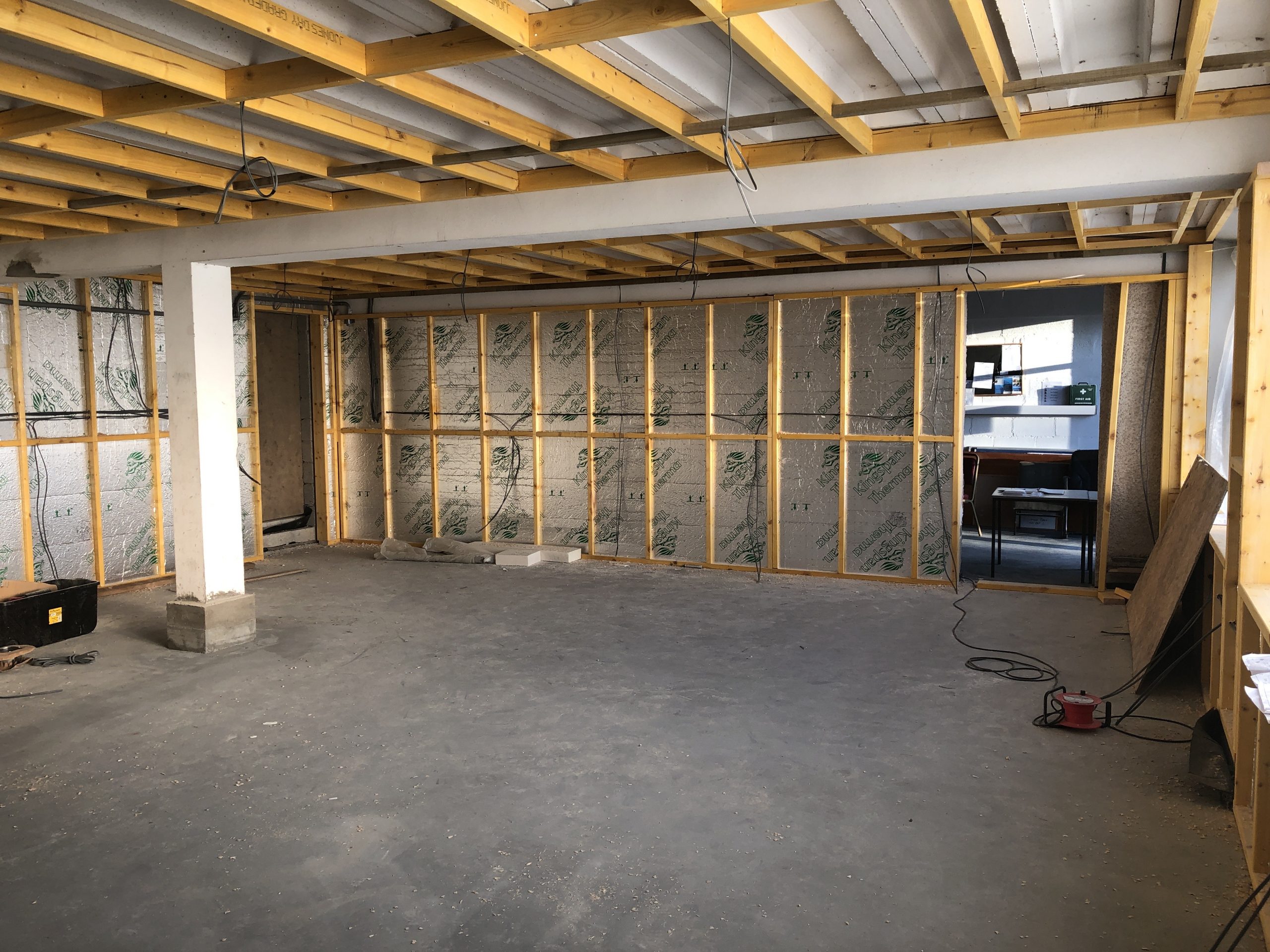 Progress as at Monday 23rd December 2019

Thank you to all who have contributed in so many ways since the decision back in late 2017 to consolidate the Banchory Men’s Shed at the Legion, with organisation, fundraising, publicity, building and fit-out works of various sorts.  2020 will finally see the opening of the Banchory shed and we wait to see how the shed goes forward with the various activities discussed over the years. Great times are ahead, and we are starting to look at what we do for an official opening ceremony.

We also wish our nearest neighbours well – Stonehaven who opened their fantastic facility earlier this year, and Aboyne who are now also well on with their build.

We wish everyone a very Happy Christmas and a great New Year – especially if you come along to the Shed!

Progress is looking good at about 70%.  This week:

Next week the joiner will continue with framing, insulation and then commence with the plaster boarding.

Couple of photos from this morning

With the Phase 1 workshop complete and Phase 2 well on the way, we thought the following guide to using tools safety would be handy…     #workplacesafety

TOOLS AND HOW TO USE THEM

WIRE WHEEL – Cleans paint off bolts and then throws them somewhere under the workbench with the speed of light. Also removes fingerprints and hard-earned calluses from fingers in about the time it takes you to utter a short curse.

DRILL PRESS – A tall upright machine useful for suddenly snatching flat metal bar stock out of your hands so that it smacks you in the chest and flings your beer across the room, denting the freshly-painted project which you had carefully set in the corner where nothing could get to it.

MULTI GRIPS – Used to round off bolt heads. Sometimes used in the creation of blood-blisters.

HACKSAW – One of a family of cutting tools built on the Ouija board principle… It transforms human energy into a crooked, unpredictable motion, and the more you attempt to influence its course, the more dismal your future becomes.

VICE-GRIPS – Generally used after pliers to completely round off bolt heads. If nothing else is available, they can also be used to transfer intense welding heat to the palm of your hand.

OXYACETYLENE TORCH – Used almost entirely for igniting various flammable objects in your shop and creating a fire. Also handy for igniting the grease inside the wheel hub froom which you want to remove a bearing race.

HYDRAULIC FLOOR JACK – Used for lowering a vehicle to the ground after you have installed your new brake pads, trapping the jack handle firmly under the bumper.

BAND SAW – A large stationary power saw primarily used by most workshops to cut large pieces into smaller pieces that more easily fit into the trash after you cut on the inside of the line instead of the outside edge. Also good for Digit Removal

TWO-TONNE ENGINE HOIST – Tool for testing the maximum tensile strength of all the stuff you forgot to disconnect.

PHILLIPS SCREWDRIVER – Normally used to stab the vacuum seals under lids or for opening old-style paper-and-tin oil cans and splashing oil on your shirt; but can also be used, as the name implies, to strip out Phillips screw heads.

CROWBAR – A tool used to crumple the metal surrounding that clip or bracket you needed to remove in order to replace a £0.50p part.

HAMMER – Originally employed as a weapon of war, the hammer nowadays is used as a kind of divining rod to locate the most expensive parts adjacent the object we are trying to hit.

UTILITY KNIFE – Used to open and slice through the contents of cardboard cartons delivered to your front door. Works particularly well on contents such as seats, vinyl records, liquids in plastic bottles, collector magazines, refund cheques, and rubber or plastic parts. Especially useful for slicing work clothes, but only while in use.

AAAAARRGHHH TOOL – Any handy tool that you grab and throw across the workshop while yelling “Aaaaarrghhh” at the top of your lungs. It is also, most often, the next tool that you will need.

Hiding an awful lot of previous work, the concrete floor is now down… 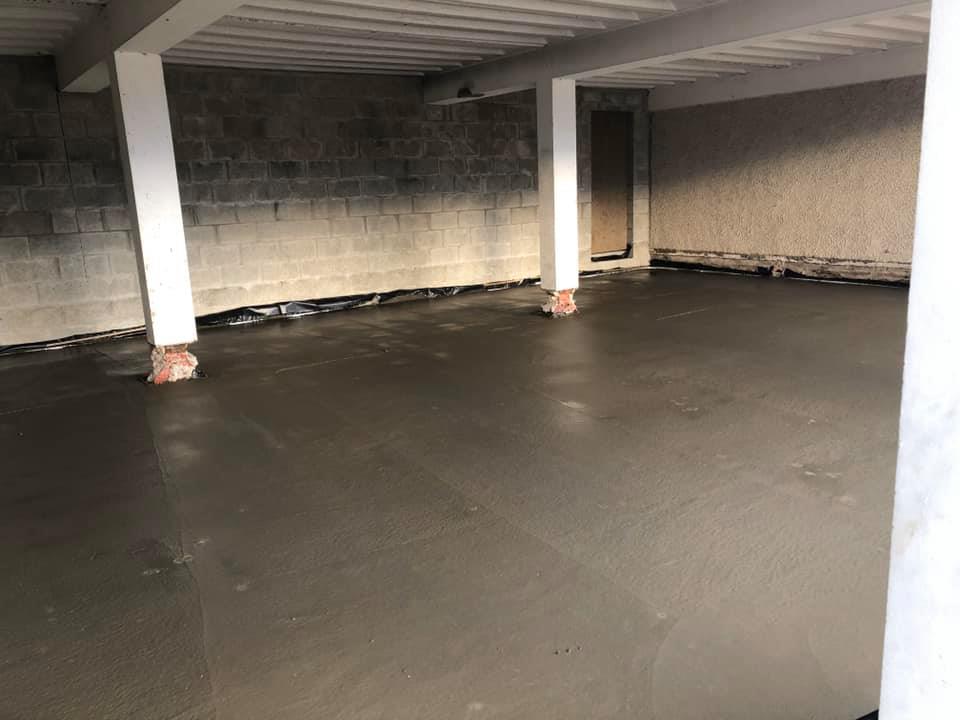 Overall progress is approximately 60%.  This week has seen:

Next week the builder will render the passage wall  to match the Legion and commence timber framing of the inside and installing insulation.

More very visible progress.  The floor is well under way

Joining us is easy. Simply download the Membership Form and bring it to the Shed during opening hours or e-mail to membership.bms@gmail.com. There are also blank forms at the Shed